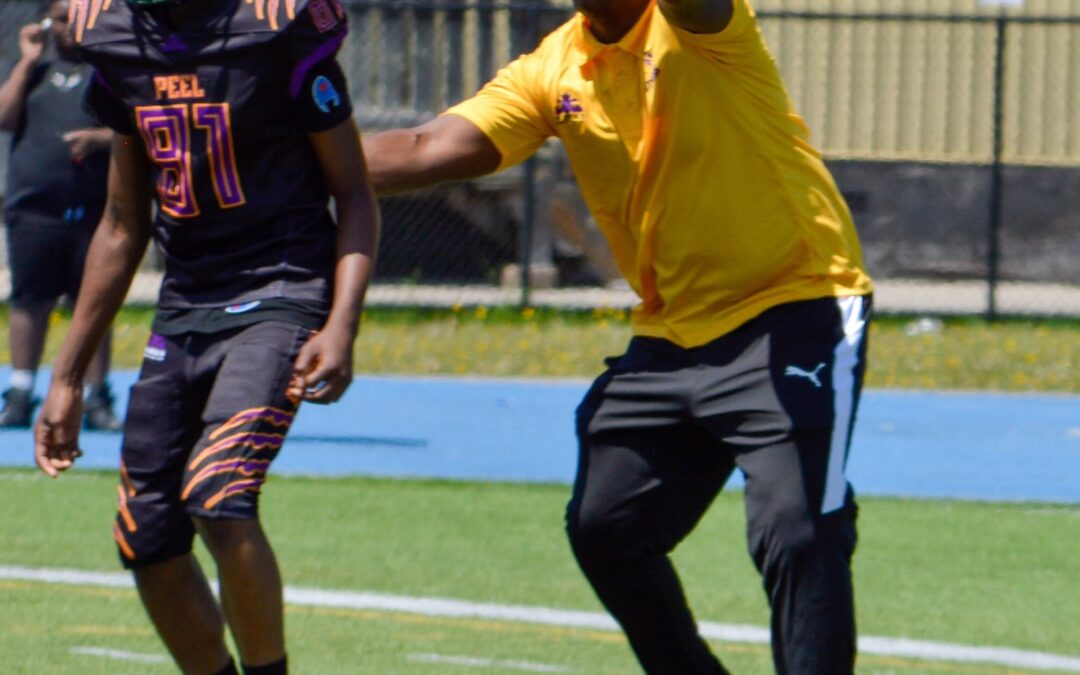 On Saturday May 14, Peel Panthers U14 (Tier 2) had their first competition in a scrimmage versus Niagara Spears U14 (Tier 1). The Panthers got off  to a slow start against Niagara’s tough ground and pound game. The  Spears broke a big run but were tackled on the Panthers’ 20 yard line by Lamar Kedroe. Niagara’s power run game continued as the fullback broke a big run onto the Panthers 5 before Joshua Arkell & Myles Reid stopped the run on the 5 yard line. The Panthers defence held strong as Niagara could not advance the ball any further.

Panthers offence debuted with two inside runs by Joshua Arkell before a game breaking reverse from Lamar Kedroe breaking 2 tackles and out running the rest of the Spears defence for a Touchdown. The Panthers
defence held strong not allowing Niagara to advance the ball for any additional first downs before giving the ball back to their offence.
Panthers had a slow drive with a couple miscommunication plays giving Niagara back the ball. Niagara went back to the ground and pound breaking a big sweep to Peel’s 3 yard line before the fullback pounded the ball up the gut for a Spears Touch Down.

The Panthers responded in style breaking a sweep to Josh Arkell who broke two tackles and out ran the Spears defence to the end zone for another Panthers’ Touchdown! With no more time the scrimmage was called with a final of 14-7 Panthers.

The team showed great character in a hard fought battle against a Tier 1 opponent. The Panthers have their first regular season
action May 21st as they will be travelling to North Bay to take on the Bulldogs in Week 1.

A big thank you to Niagara and HC Austin Huh for their travels and competition that allowed us to become better!

More pictures from the game can be found HERE.